A very usefull class in Java, that I needed in C# some time ago. This is my implementation of the StreamTokenizer. Have a look at this small sample application parsing a JSON file.

This class is a very helpfull tool when it comes to text streams that need to be parsed as objects. Once configured for the fitting format, it handles all the whitespace-skipping and token-building for you. This means you don't have to use the Split method of the string class. This is the most common recommendation for beginners, but we take stuff more serious here. Using the string.Split method would mean you need to read the data as string first and call the Split method afterwards, resulting in memory wastage - the data is hold at least twice in memory (1. the string itself - 2. the resulting split array). The Split method isn't very fast, too.

Using the StreamTokenizer you don't have to be afraid of high memory cost. It uses one buffer (2048 bytes) to store the characters read from the text stream and then iterates over each character to build up some nice tokens from them. There are some variables used to handle this tokenizing, but I'm sure this won't add up to doubled memory usage, like the read-and-split method would.

There is also another great advantage: the StreamTokenizer handles quotations and line breaks automatically - meaning: you don't have to handle them your own (quotations can be a real pain). For examle: try to think of an easy way to parse this XML node:

Easy you think? Well, I'm not so sure... You can't just split the string using the space char (char 32) because you would eighter not split the equal sign for the first attribute (name), or if you intend to split the attribute (name=value) using the equation char (char 61) to get the value, then you have split the second attribute (problem1) too early by using the space character, this left you with 'problem1', not 'problem1=value'. Also all the attribute values are quotations containing spaces. You'll have to join the words again to get the final value!? I don't even ask how to determine when the element ends, as the second attribute value contains all kinds of edgy chars. In short: I can't think of a very simple way to split this XML.

To show you what I like about the StreamTokenizer I've chosen a simple JSON sample. I've found this sample data on the Wikipedia page for JSON. JSON is a good example for the StreamTokenizer, because it describes an object hierarchy using a minimum of structural overhead. In fact: you can put a small description of JSON in just three lines:

There are objects stating with { and ending with }. Each object may have multiple attributes, which constist of a name and value separated by a colon. Attribute values can be strings, doubles, booleans or other objects - also possible are arrays. Arrays start with [ and end with ]. They can contain multiple objects separated by commas.

Setting up the StreamTokenizer

First, the syntax is resetted, so every possible character code (0x00 to 0xFF) is an 'ordinary' char now. This means, a call to the NextToken() method will return each char as single-char-token. This is used for all the special characters within the format, like: {}[]:,

The next part defines all lower and upper alphabetical character as 'word' chars. In fact: this is used for the 'true' value only. This token is the only word not contained within a quotation.

EnableParseNumbers() - just as the method name implies - enables the 'number' token type. This means all tokens starting with one of these chars [0123456789.-] are considered to be numbers.

One important definition is the quotation character. Nearly all words in this JSON sample are quoted and therefor easily recognized as strings.

Finally the white spaces are defined. As the JSON format doesn't care much for line breaks, we also don't and skip them.

Once configured, the NextToken() method is nearly all we have to call again and again. As described in more detail within the code, the NextToken() method reads the next token from the initially provided stream and returns its token type. There is the TokenTypes enumeration containing all possible types - like Word, Number or EOF (end of file). But in some cases the NextToken() method returns the character code describing the current token. This happens for all ordinary (single-char) tokens and quotations. With this returned token type it is easy to use a switch statement to decide what type of token was read. Those statements are best for deciding what code to run next, compaired to string-comparisons.

It sure is a very good - if not best - practice to have one class per object type that needs to be distinguished. In case of the JSON format, there are objects, attributes and arrays, just as mentioned above. An implementation of a JsonObject class could therefor look just like this:

You sure stumbled upon the - until now - unmentioned methods AssertToken() and PushBackToken(). Both are very usefull methods to ensure the expected characters to be read. AssertToken() throws an AssertionException if the token type returned by NextToken() doesn't equal the asserted one. In this class the AssertToken() method ensures that every JsonObject starts with { and ends with }. Combining the NextToken() and PushBackToken() methods you can peek at the next tokens and decide what to do next. This is used within the ReadAttributes() method of this class: As long as a JsonAttribute is followed by a comma, the next tokens are considered to be an attribute again. The last attribute will always be followed by the closing } char of the JsonObject. This token is pushed back, so it can be read again from the AssertToken() method in ReadObject().

The following JsonAttriburte class shows how to handle a returned token type by the NextToken() method using the switch statement. This example is pretty straight forward and should easily be understood:

The last of the three mentioned Json classes (JsonArray) does nothing new. So, you may look this one up within the attached sample project.

After adding some ToString() methods to all classes, which reassamble the objects to a readable string, the result of this sample project may look like this: 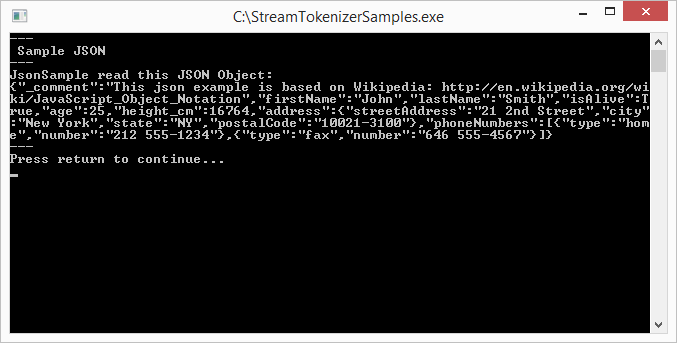 I hope you can use this sample project to understand how you may use the StreamTokenizer class. Please don't consider these JSON classes to be complete, fail-save or stable at any point! They're to show off the use of the StreamTokenizer only. You can easily find some stable JSON libraries using your favourite search engine.

Here you can find the sources for the StreamTokenizer and the sample project, if you're registered and loged in.

© 2022 by Khaos-Coders. All rights reserved. Theme by RocketTheme.

We use cookies on our website. Some of them are essential for the operation of the site, while others help us to improve this site and the user experience (tracking cookies). You can decide for yourself whether you want to allow cookies or not. Please note that if you reject them, you may not be able to use all the functionalities of the site.